Tomasz “Vondagar” Ochalik is a computer graphic artist who creates photorealistic nature assets on a daily basis. His works were used by Wiedźmin I, Ancestors Legacy, or even the Polsat “Czysta Polska” campaign. We talk with Tomasz about how to create assets and graphics for games.

How did you even happen to start working with computer graphics?

Since I was a kid, I have been drawn to computers and drawing. When I was five years old I was drawing with crayons, when I was in elementary school coin games appeared, that is, common coin-operated machines. At the time, watching computer graphics was very inspiring. At about 12 years old, I was already in touch with 8-bit computers and art studio software – first the Amstrad 6128 at school, then the Commodore C64, the little Atari 65xe, and the Fun with Art program.

Then the Amiga 500 and more luxury paint and personal paint programs came into my life, which was really good for those times. Then I also mastered my first 3D design app – it was real 1.4. It took up to two days to display the simplest few tubes and nuggets. Then I switched to the Amiga 1200 and finally the PC came out. I started with the 486DX. I remain loyal to PCs to this day and specialize in almost every graphics, whether DTP or 3D. Ultimately, I am very interested in gaming art, 3D graphics and everything related to it.

You are one of the people who created normal maps for the first part of The Witcher. How did your collaboration with CD Projekt start?

I was working on a non-profit project. It was a 3D FPP game with a plain map texture implementation in OpenGL. Then I learned to create the aforementioned regular maps from scratch. There I met the guys from the SSS team from Silesia, whom I greet warmly. Incidentally, I met a guy who later started working at CD Projekt RED and he involved me in the Witcher I project. And since I love Andrzej Sapkowski’s saga, it didn’t take long to convince me.

I’ve created a lot of projects there. Not many made it to the finals, but that’s probably the norm in any such big mission. Some things were stale or stopped playing with a fickle concept, which is hard for me to judge. To be clear – I didn’t precisely create characters for The Witcher, but only added details on a regular map. It is a texture that simulates convex information on the surface of the model, interacting with light. I have received several models for improvement. Most of them were from before 2005 and were out of the norm in 2006-2007, when the first part of The Witcher was published. 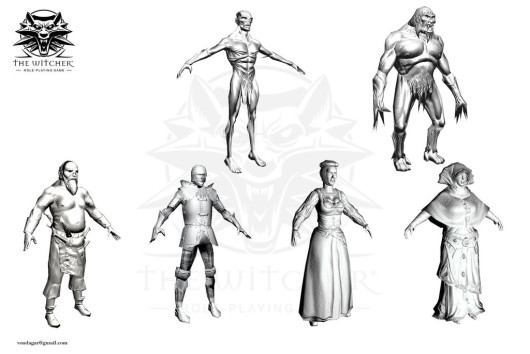 Thanks to this work, many projects were saved. Most of them were characters in the background – vendors, village women, guards, or some monster. As well as the characters of the hunter or thaler. Although, as I remember – the latter was initially an ordinary beggar. I even worked on the first variant of the main character for E3, but it was eventually replaced by a new one.

Have you had the chance to collaborate with any other game developers since then?

Actually no, I had about 5 years of break. I was involved in the private and professional life of a DTP graphic designer and running my own business. Unfortunately, in those days, working remotely was practically impossible, and no gamedev studio wanted to hire remote employees or contractors, and I wouldn’t move [Tomasz pochodzi z Mielca, w woj. podkarpackim, a obecnie mieszka w Bieszczadach – przypis red.].

In general, this cooperation model, in my opinion, works on average. I think the engine engineering was a huge hurdle. Each studio had its own model or developed its own, so sending project content to subcontractors could expose the game developer to uncensored leaks to the press or the Internet. In addition, there are a number of complications in displaying designed models or diagrams in the right way.

I decided to return to the gaming industry after only 5 years. I joined a small group of indie developers. Initially, it was a non-profit project that eventually turned into a commercial product. We have been working on the development of the MMO – Gloria Victis from the beginning. There, I mainly dealt with creating equipment for characters. In the end, our paths diverged.

However, the project survived and was released on Steam in beta. After 2015, I started working with Nature Manufacture and it continues to this day. We mainly specialize in mapping the natural environment. Each of us works remotely. I mainly focus on models of trees, shrubs and rocks. And if needed, I model and sculpt manually in Zbrush, although these are mainly scans I do in Reality Capture.

Some of your assets also went to Polsat’s “Pure Poland” campaign, right?

We create the assets and they can be used in different places. We often learn about such things by chance. We sell assets on the Unity and Unreal platforms – which are actually two freely available engines. However, it is mostly small independent studios and hobbyists who use our assets. We put a lot of effort into improvement. We care about realism, while using the display unit effectively. Our environments perform very well in terms of FPS.

You also made Viking characters for Ancestors Legacy, right? How do you remember this collaboration?

That’s right – I really like this medieval atmosphere. Once I found out that Destructive Creation studio makes an RTS game in such facts – I bred Jarek Zieliński and asked to participate in this project. Many classes of Vikings belong to me. 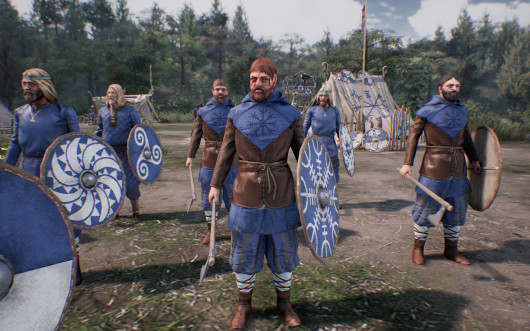 We are a well-coordinated team, and in addition, freedom of action is our main driving force here. We work remotely, and I moved to the Bieszczady Mountains, because I love working on nature, and surveying nature allows direct and unique contact with it. All the time I get a lot of job offers from our local and foreign developers, but unfortunately – I am not interested in working for a company, it will be difficult to replace the atmosphere in the nature industry.

Where do you get your inspiration to create your drawings? For example, mentioned Vikings or characters from The Witcher?

For The Witcher, there wasn’t much inspiration. It was very technical work. I gave a model with a texture of my color and that’s it. I had to add some regular maps and a shiny texture. In Ancestor Legacy I got concepts and graphics. This is the norm for such productions, but in the end I added a lot myself. I am interested in a historical approach. I don’t really like it when a character’s gear is created without any basic logic or knowledge of what armor or period clothing looks like. Unfortunately a lot of games suffer from this disease and ignore immersion issues, which is something that bothers me personally a lot.

Games, TV campaigns, even a short film in honor of the Dark Souls series, Diablo or a VR app for training foresters – your assets have gone to a variety of industries. It has been used by both amateurs and professionals. Where do you like to see snippets of your work?

I think I’m looking forward to seeing it in gamedev. I’m glad to play something where some of my work has been used. Anyway, that’s the main purpose of our asset – gamedev.

The forest you created at Nature Manufacture also won first place in the Best Art Content category at the 2019 Unity Awards. However, has this award had an impact on your career?

I think so. We have definitely become a more recognizable brand and customers are becoming more and more confident in our work. We provide assistance to each of them and try to constantly update and develop our assets. We also received a nomination for Mountain Forest in 2021. Ironically – we’ve worked on this forest twice as long – and the package itself has a lot of content. 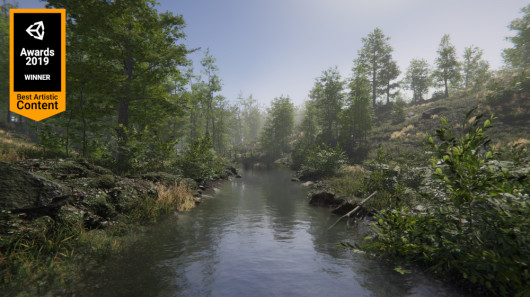 What are you currently working on and what can we expect from you in the future?

I’m currently developing our lava flowing system environment, LVE 2019 – Lava & Volcano Environment 2019. For several months now, I’ve been engineering a fantasy low underground castle with a system of stairs and columns. However, by the end of the year we plan to expand RAM 2019 – River Auto Material 2019. We will add more assets, especially surveys of plants and trees related to the aquatic environment. 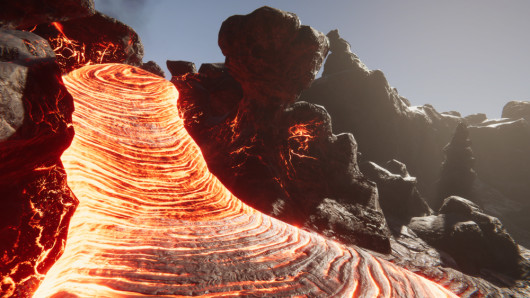