Sanuk/Podkarpase. Ahead is the 3rd International Festival of Organ and Chamber Music, which will be held from May 17-22 in Sanok. For six days, music lovers will have the opportunity to listen to exceptional concerts in Sanuk churches.

Esanok.pl is the official media sponsor of the 3rd International Festival of Organ and Chamber Music

– The idea of ​​organizing a festival in our city arose from the need to revive organ music. With concerts in different configurations, we want to attract the audience’s interest in organ music, because it is still unknown – niche music, especially in our area. In local areas, the organ is associated only with religious music – with the church – explain Łukasz KotFestival organizer.

Concerts are held in churches because we have access to instruments. The organ is a very specific instrument, and apart from churches, we can find it in music halls or in large concert halls.

– The organ remains the main center for concerts. We hope that the diversity and uniqueness of the festival, the extraordinary wealth of literature, will attract not only organ sounds, but also lovers of other sounds. In order to exist, high art requires the support and presence of people who are outstanding in their profession, people of extraordinary knowledge, passion and openness..

Two other artistic events will take place as part of the festival: the 2nd National Competition for Young Organists – which last year turned out to be a very successful idea, and the International Sessions of Organ and Chamber Music.

The competition is intended for students of organ classes at second-level Polish music schools.

19 participants from all over Poland (Czestochowa, Katowice, Konin, Krakow, Milek, Pozna, Rybnik, Rzeszow, Warsaw, Wroclaw, Jasow) participated in the competition.
Each of the contest participants (younger and older group) will perform the obligatory program in two stages: the first will be performed on a historical mechanical instrument by Jan Śliwiński, at the Church of the Exaltation of the Holy Cross in Sanuk. The second stage will take place in the Basilica of the Sacred Heart of Jesus in Posada, where there is a symphony instrument, much larger, because it has a capacity of 38 voices, with pneumatic electrotherapy. The competition was divided into two stages in order to be able to hear the participants in different repertoires. This provides a cross-section of possibilities, thanks to which the jury can comprehensively evaluate the participants of the competition.

The festival is gaining increasing interest, which also motivates the organizers to constantly develop its format and start collaborations with other artists and music groups. Music lovers who would not be able to attend church concerts, in real time, will be able to watch their broadcasts in real time on the Internet. The broadcast will be carried out by the professional company ARS SONORA of ód, which aired the events of the festival last year. Last year’s concerts can still be watched on the YouTube channel.

The organizer of the 3rd International Festival of Organ and Chamber Music, the 2nd National Competition for Young Organists and the International Cycles of Organ and Chamber Music is the Pro Artis Association, whose founder and president is Łukasz Kot, and the artistic director of the festival is Dr. Pyotr Rojic, Dean of the Instrument Department, Professor at the Karol Lipinski Academy of Music in Wroclaw. 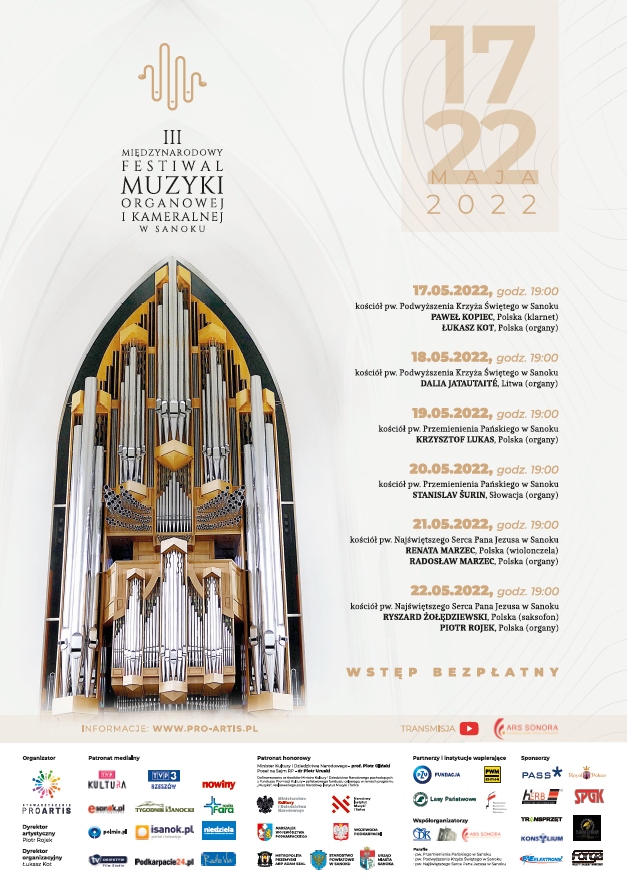