Alan Rinkevich: Are your family and loved ones safe in Ukraine? Why did you choose to stay?

Maxim Dondyuk: Not all of my family members are safe, but so far, fortunately, they are all doing well. I stayed because this is my country. After the outbreak of the war, everyone made a choice, some left, others remained to stop the Russian invasion. Everyone chooses the path that is best for them. Someone went to the army, someone became a volunteer, and someone helped financially.

I can get more use out of my camera than having the gun in my hand, showing the truth, and fighting Russian propaganda.

Of course I was afraid, every normal person is afraid. We have to feel it in order to control the situation. The fear should be palpable, but not paralyzing. It’s hard to describe my feelings because it’s hard to imagine in modern society, in modern times, some big country destroying a smaller neighboring country, with bombs, missiles, artillery, tanks, soldiers, shooting civilians, women and children. Burn entire cities, destroy everything in its path.

In the early days, everyone probably panicked, and many of Kyiv were evacuated, thinking that it would fall. I and a few other photographers decided we would stay even if the city was besieged. It was a historic moment for me. Of course, he was not without fear. But the realization is that you need to be present in the moment and do your work.

How did you feel when you learned that Russia attacked Ukraine?

The war in Ukraine has been going on since 2014, not 2022. I was in the east at the front with soldiers in the trenches two weeks before the Russian invasion. I got home and, unfortunately, the war began at four in the morning. When I woke up, I saw a lot of messages on my phone, but I did not understand what was happening, I was shocked to learn that all the major cities were bombed and that Russian forces had entered Ukraine. I felt anger, disappointment, despair and a clear certainty that I should be there. Although I have just returned to Lviv, where I live, I immediately went to Kyiv.

You post on your Facebook photos of the ongoing war, as well as photos of soldiers from the weeks before the war. What’s the mood then? Did you feel the aggression coming from Russia?

I was on the front line ten days before the war. One of the sites was located near the town of Popasna, where fierce fighting was taking place. Many of those I photograph are already dead. The situation I was in is no longer under the control of the Ukrainian army. At that time, everyone thought the place was very calm, and said it was the calm before the storm. And although consciousness was not ready to accept the fact that war would begin, everyone was counting on an attack in the Donbass, perhaps in Kharkiv, but no one was prepared for what happened. The war has begun…

A Ukrainian woman in a hospital in Kharkiv

Do you feel that you as a photographer have a mission to capture the evil that is happening? Show people the horrors of war?

This is my job. Like I said, everyone chooses his role in times of war. What you do in peacetime may not make sense in war, because they are all rallying against the enemy. Someone goes to the army or territorial defense, someone volunteers, someone helps financially, someone repairs military equipment. I use my camera to document this story. This is a historic moment and I am recording this war to show what it really looks like, to challenge what Russian propaganda has to offer. For future generations and future generations.

These photos will help the Russians realize the cruelty of the war started by Putin? It seems that they do not understand what is really happening in Ukraine …

Definitely. It is difficult for them to get information, everything is hidden there and they do not get the real picture of what is happening. But under the Soviet Union, literature and radio were also banned. People were able to listen to forbidden music and read forbidden books. Therefore, it makes no sense to wonder how these pictures, these real pictures of the war will reach the Russians. Whoever wants to find them will find an opportunity. Those who are content only with what they see on Russian television will not look. They cannot be influenced, only their personal experience will affect them. 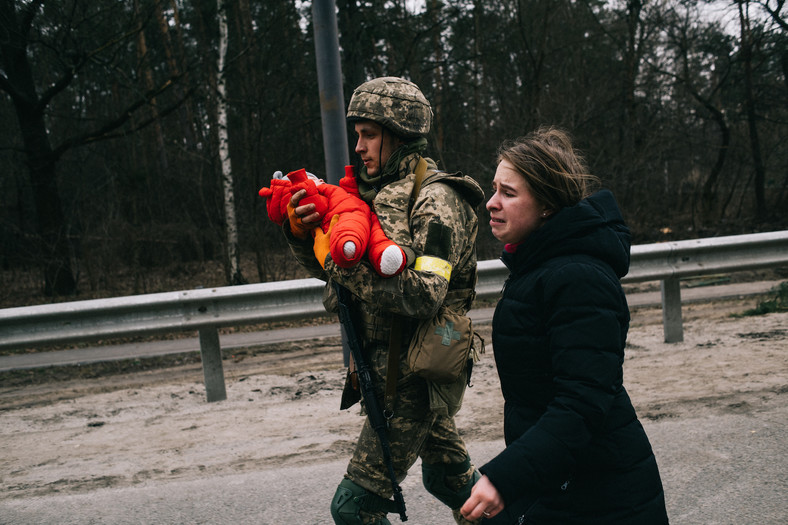 Photo by Maxim Dondyuk for the “Time” cover

Can you talk about the “Time” cover photo? The image of a Ukrainian soldier moved a crying woman with a small child in her arms.

The casing itself is sturdy – it doesn’t matter what’s on it. ‘Time’ has a huge impact, and every photo of any photographer who has worked in Ukraine will have the same strong impact, so I don’t think that’s the power of this photo. This is the power of the media that propagates them. Photography in itself does not change anything, but it earns in cooperation with the media or museums. When you put a picture on your cover, millions see it.

The photo was taken, so to speak, “on the run.” This is the small town of Irbin, which was bombed by Russian troops, the bridge over the river towards Kyiv was blown up so that Russian tanks could not pass through it. People were escaping over this broken bridge. It was safer for them to stay in the city. It was my first visit there. Stunning scenery, thousands of people standing under it, burning city in the background. I saw a woman crying and a soldier helping to carry her baby. Everything was happening so fast that I didn’t realize the whole situation, didn’t think much, I picked up the camera and took some pictures.

The whole world fell in love with the Ukrainian president. became a hero. Does such a strong leader who did not flee the country but rather stood by it give people hope?

Yeah. Before the war, in Ukraine, many did not like Zelensky, he did many things that people did not like. I have friends who categorically opposed him and considered him the worst president. In peacetime he did a lot of nonsense – he hid corruption, helped the oligarch, cooperated with the people of Yanukovych, etc. Now they are withdrawing their words. In wartime, he is the president that Ukraine needs. He stayed in the country and gives hope to the people, speaking to the international community in the language that Ukrainians want to speak. And he does not blame his talks with the Germans who are still helping Russia. Say it in their faces. He sets an example and does everything in his power to win.

Many Ukrainians are proud of him, and many who opposed him now completely sided with him.

Western actions for many – Not only Ukrainians – Seems insufficient… What can Europe do to help Ukraine and speed up an end to this war?

Europe suffers from World War II syndrome, afraid to intervene lest a third outbreak. They do not understand the mentality of the Russian people who only understand force. All negotiations and diplomatic decisions are a sign of Russia’s weakness. The Ukrainian nation is strong, the army is ready, but we don’t have the resources, we don’t have heavy equipment, no tanks, no missiles, no air defense enough to defend ourselves, let alone a counterattack to retake the occupied territories. .

If Ukraine does not stop the Russian army, it will destroy other countries. Russia will not stop at Ukraine. He is fighting to destroy Europe and against NATO, the European Union and democracy. Therefore, the sooner the governments of the European Union will realize this, the sooner they will help our army, which will win and stop Russian aggression. Indulging Putin will do the same thing as surrendering to Hitler. Europe now has a great opportunity to stop Russia in the hands of another country. All we need is tons of scrap metal – tanks, weapons, anti-aircraft defense, artillery, etc. 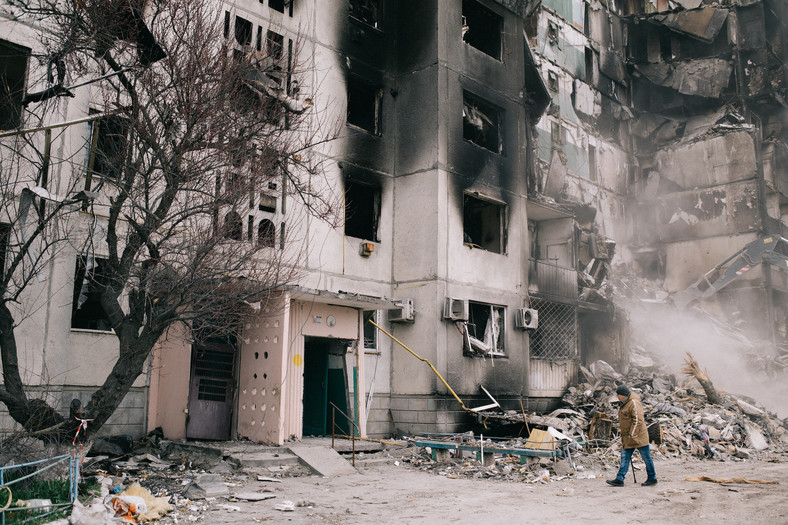 Ruins in the town of Borodzianka

Is there anything you would like to say to the Russians, or perhaps to Vladimir Putin himself?

What can you say to a sick person? string. I would like to say to the Russian people that it is not true that you are innocent, that this is all about Putin, and it has nothing to do with you. Because what was Putin’s fault in Bokza? He did not shoot people himself, torture them, bind them, or rape them. All this was done by your husbands, sons, brothers, grandchildren and uncles. All this was done by your army which cannot even be called an army after this crime.

It is not Putin who is destroying Ukraine. You do it with pleasure. The problem is with all Russians. You can kill Putin and nothing will change. Putin is nothing but a reflection of the people’s views.